Colony Collapse Disorder: Why are Bees Dying Off?

There has been widespread bee die offs throughout the world, leaving scientists, ecologists and farmers concerned for the future of not only bees, but that of humanity itself. Massive bee die offs should have us all worried. No bees, no food. So what exactly is causing colony collapse disorder and contributing to bees dying off.

The rapid growth of industrial agriculture — consisting of vast expanses of monoculture that are maintained by chemical fertilizers and pesticides — has severely impacted natural ecosystems all around the world, often with devastating affects.

Not only does the monoculture method of farming drastically limit biodiversity, the chemical concoctions applied to control pests in order to achieve maximum crop outputs, harms insects and other wildlife, such as birds that feed on insects. The widespread implications of indiscriminate pesticide usage on crops is hauntingly documented in Rachel Carson’s classic book, Silent Spring, first published in 1962, which is widely recognised as being the catalyst that launched the environmental movement.

While the chief culprit identified in Silent Spring — the potent pesticide DDT — is now banned in most countries around the world, other pesticides have filled the void, and these pesticides continue to wreak havoc on wildlife. A relatively new class of pesticides known as neonicotinoids (or neonics), which was introduced by Bayer in the 1980’s, has been implicated in the demise of bee populations around the world. Being extremely effective in controlling pests, neonicotinoids rapidly gained traction in the industrial agriculture sector, and by 2008 represented 24% of all insecticides used globally, with Bayers’ Imidaclorprid taking the top honour of being the most widely used insecticide throughout the world.

In 2006 the world began to notice that honey bee populations were being decimated, with mass die-offs of entire bee colonies not uncommon. In fact, the phenomenon became so common, it even got a name: Colony Collapse Disorder (CCD). Dying bees exhibited symptoms typically associated with insecticide poisoning: poor coordination, tremors and convulsions, before ultimately succumbing to their fate.

Because honey bees are important pollinators that play a crucial role in ensuring that we have food on our tables, governments throughout the world were forced to sit-up and take notice. A flurry of government funded scientific studies were initiated to determine the extent of the problem and to find the answer to what is killing our bees.

It turns out that the problem is a global one, with beekeepers from Europe, the United Kingdom, the United States and even Australia and China reporting severe losses in their colonies. In the US, beekeepers lost more than 40% of their colonies during the 2014-2015 winter period, while globally it is estimated that beekeepers across 29 countries lost around 12% of the colonies they manage in the winter of 2015.

There are several potential causes of colony collapse disorder in bees, as outlined below: 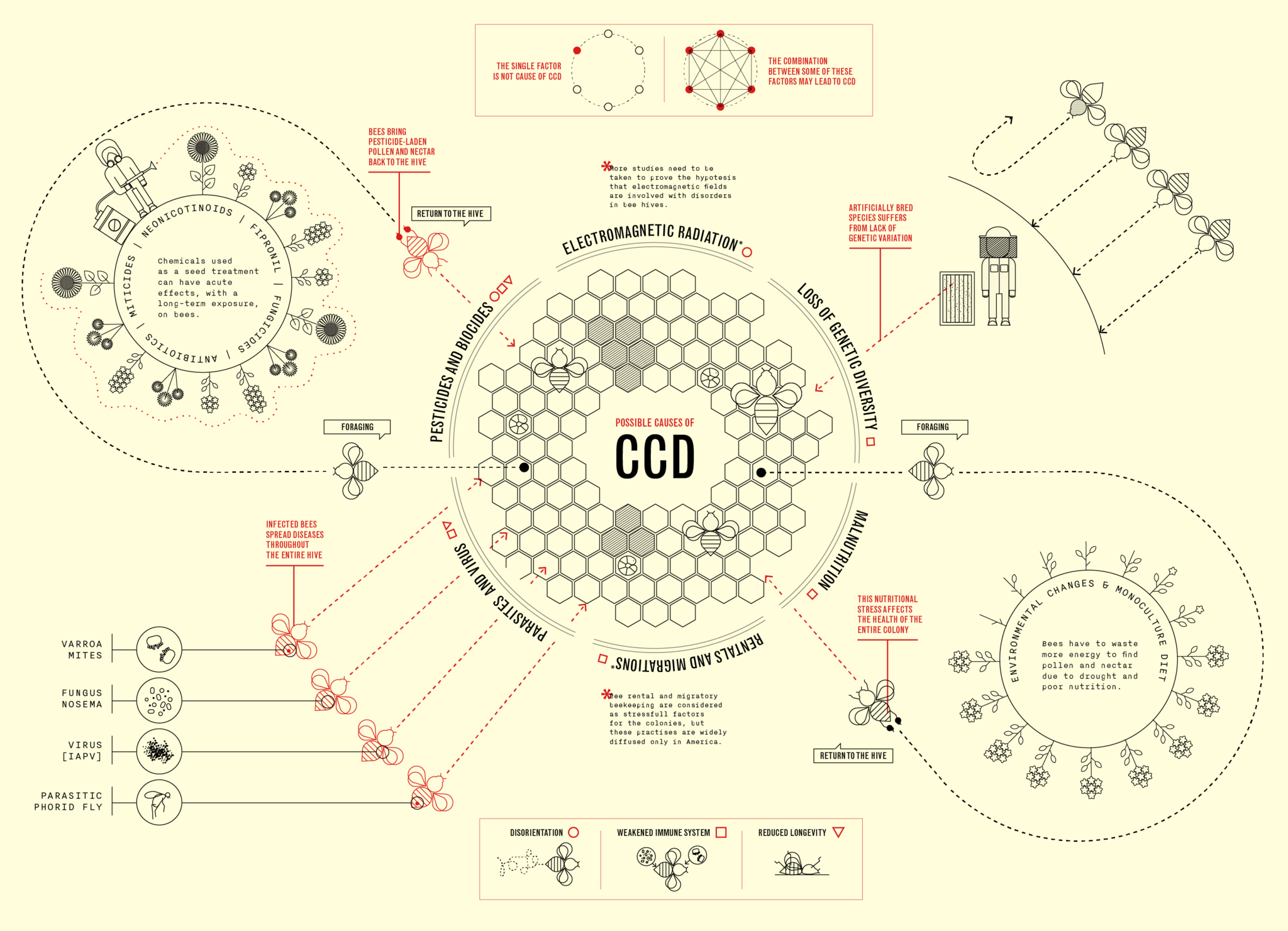 However, considering the extent of the problem, there must be a common denominator. It’s also just too much of a coincidence that honey bee colony collapse disorder is becoming more widespread at the same time that the use of neonicotinoid-coated seed treatments is expanding.

Where are Neonics Used?

While several European countries have regulated the use of neonicotinoids in agricultural crops such as canola, corn and sunflower, they are still widely used in the United States and elsewhere around the world, even though they pose such a huge risk to the agricultural sector itself.

Almost all corn and roughly a third of all soybean grown in the United States is treated with neonicotinoids. In Australia, neonics are used as seed treatments for a variety of different crops, including sweetcorn, maize, cereals, sorghum, canola, sunflower, lentils and lupins, field peas, faba beans, pulses, cotton, and grown for forage and seed pasture such as clover, ryegrass, lucerne, medics and phalaris, as well as forage brassicas such as rape, turnip, kale and swedes. Yet, even though some of these crops, for example corn, are not pollinated by bees, because they are so extensively farmed, the neonics applied (either as a seed coating, spray or soil drench) still gets into the environment — for example, neonic-coated seeds can release dust into the air during planting, where bees can come into contact with it.

Insect pests, such as white fly and other common crop pests, are the typical target, however, because these pesticides do not discriminate between the good guys and the bad guys, beneficial insects, such as bees and other key pollinator species, will continue to fall victim when they come into contact with these poisons.

A recent study found that in 2000 less than 30% of US corn and less than 5% of US soybean crops were treated with an insecticide, but contrary to the belief that insecticide use had decreased due to spraying being discontinued, this had in fact increased to at least 79% for corn and 33% for soybean by 2011, primarily due to the planting of neonic-coated seeds.

“Adoption of neonicotinoid insecticides by seed companies and farmers has been very rapid and does not appear to relate well to a corresponding risk from insect pests,” said John Tooker, associate professor of entomology at Penn State University, and co-author of the study. “This pattern suggests that neonicotinoids are often being used as an ‘insurance policy’ against uncertain insect attack, rather than in response to a documented pest threat.”

The results of this study inform an ongoing debate as to whether neonicotinoids detected in the environment are having negative effects on non-target pollinator species, including wild bees and managed honey bee colonies.

Pesticides Implicated in the Collapse of Bee Colonies

In many of the CCD studies undertaken throughout the world, the results point to the same culprit: neonicotinoid insecticides. Samples of dead bees and pollen samples recovered from hives show evidence of neonics, and studies have revealed that even at low concentrations, these toxins can reduce the fertility of queen bees and reduce the immunocompetence of bees, making them more vulnerable to viral and parasitic infections. In one study, queen bees that were fed syrup laced with Bayers’ neonic, Imidaclorprid, laid significantly less eggs — in colonies that were fed higher doses, this was as much as two-thirds less — than queen bees in colonies that were not exposed to the insecticide. As each colony only has a single queen, she plays a critical role in the continuity of the colony. If her health and ability to reproduce is compromised, ultimately so too is the survival of the colony.

“The queens are of particular importance because they’re the only reproductive individual laying eggs in the colony,” explains Judy Wu-Smart, assistant professor of entomology at the University of Nebraska-Lincoln, and lead-author of the study. “One queen can lay up to 1,000 eggs a day. If her ability to lay eggs is reduced, that is a subtle effect that isn’t (immediately) noticeable but translates to really dramatic consequences for the colony.”

Another study suggests that neonics may inadvertently act as a contraceptive to male honey bees, reducing the amount of viable sperm they produce, as well as their lifespan.

“Most neonicotinoid studies that employ honey bees have focused on workers, which are typically the non-reproductive females of the colony. Male honey bees have really been neglected by honey bee health scientists; while not surprising, these results may turn a few heads”, says Lars Straub, a doctoral student at the University of Bern and lead author of the study.

Co-author Peter Neumann from Bern agrees: “These results, coupled with the importance of males to honey bee reproduction, highlight the need for stringent environmental risk assessments of agricultural chemicals to protect biodiversity and ecosystem functioning.”

Whether the fertility of the queens, the drones, or both are being compromised, the end result is the same — less viable eggs; ultimately leading to the collapse of the colony.

The damage is not limited to honey bees; even wild bees and other insect pollinators are affected. For example, populations of the North American bumblebee have dropped by 90%, while a long-term study conducted by researchers in the UK has confirmed that these best-selling insecticides are negatively impacting a variety of wild bee species.

Why are Neonics so Bad for Bees?

Neonicotinoids are applied in many ways, from traditional crop sprays to the more recently introduced method of using it as a seed coating. While the latter may seem a more benign approach, the opposite is in fact true, as the toxins diffuse throughout the entire developing plant, contaminating the leaves, fruit, flowers and even the pollen and nectar, where they pose a threat to pollinators dutifully going about their business. Furthermore, because they are designed to be long-lasting, they persist in plants and soils, where they can continue to harm pollinators for months, if not years, after the initial application.

With Big Ag pretty much controlled by Big Biz, the future for bees and other pollinators does not look bright. Monsanto, the agricultural seed giant who declares itself a “sustainable agriculture company”, delivers “agricultural products that support farmers all around the world”. These products include genetically modified seeds coated with Bayer’s best-selling neonicotinoid pesticides. Hardly sustainable. And if that scenario is not bad enough, the two companies plan to merge. Yep, Bayer and Monsanto, as thick as thieves. They even have a website dedicated to the merger, and here’s the kicker, it’s called ‘Advancing Together‘, with the tagline  ‘Creating a Global Leader in Agriculture’.

Many people have opted to shun commercially produced food, opting for organically grown fresh produce instead, as it is healthier for both the consumer and the environment. However, the problem is not limited to agricultural crops. Even ornamental plant seeds and fruit and vegetable seeds sold to homeowners are coated with neonics in an effort to make them more pest-resistant. So, if you are wanting to cultivate organic veggies in your organic vegetable garden, or have a vision of growing food in harmony with nature, think twice before you rush out and purchase seeds that in all likelihood have been coated with harmful neonics. Rather source seeds from an organic supplier, either locally or online.

Bees and other insect pollinators are crucial to the success of agriculture, and ultimately the food security of everyone on the planet. It just seems crazy that a leading agri-tech company that considers itself a ‘Global Leader in Agriculture’ is prepared to kill the goose that laid the golden eggs in its quest to boost it business interests, with scant regard for the consequences.